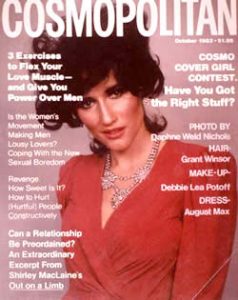 In 1987, when Daphne and Diane had their studio on fashionable Newbury Street they were asked by the Boston TV show- NEW ENGLAND AFTERNOON – to host a contest to find a local woman to be the cover girl for COSMOPOLITAN Magazine.

Our studio was swamped by hundreds of eager women, all ages and sizes. Joan Q. Eastman was the CO-host of the popular talk show along with the Fox Networks’ the “Factor” host, Bill O’Reilly.

Daphne remembers – Bill O’ Reilly opened the show by giving away the whole surprise and telling the audience that Joan Q. Eastman, his CO-host, was going to be on the cover of COSMOPOLITAN Magazine. It was a mock up cover made by the TV station’s graphic art studio. But the photograph was meant to be the climax of the show. Good old Bill O’Reilly couldn’t wait though, as soon as the camera was on, he gave it away. Joan Q. Eastman handled herself like a gracious lady, not saying a word (except for the look of shock and disappointment on her face that I will never forget).

Currently, Daphne and Diane are reviving the format of their “Living Unlimited” cable show to be aired on the internet as a video Pod Cast with many interesting guests.