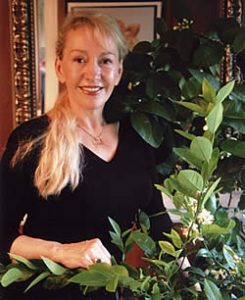 Daphne Weld Nichols, a Bostonian, was building her photography career while attending college majoring in Art History. Daphne has been a professional photographer, specializing in fantasy and glamour photography, for over 25 years. It was at the urging of her mentor, Roydon Burke, that she began entering photography contests, winning one award after another worldwide.

While most teenage girls aspired to attain the glamour looks portrayed by movie stars and models, Daphne, who had been approached for a modeling career herself, opted against being in front of the camera. Instead, she spent her time perfecting her craft of creating the same spectacular images of women she had seen splashed throughout beauty magazines. Daphne works from the soul, and has the intuitive ability to transform the average woman into a visual affirmation of her hearts desire.

After mastering the technical aspects of photography, Daphne filled her studio with dozens of lights, reflectors,, and other assorted photography paraphernalia which is used by most professional photographers. However, during one particular photo shoot, Daphne realized she could not even see her subject through all the blinding artificial lighting and sterile equipment. It was then she realized that props and mechanical apparatus only served to obstruct the inner beauty and image of her subject. The equipment somehow blocked and became a barrier to the quality of the final photographs. 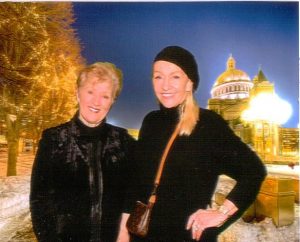 misconceptions. She was finally free to create the breath-taking, spectacular trademark photographs she has become known for. By using natural northern light, Daphne was able to develop the same flattering style used by the great master painters, before the invention of electricity. Without the confines of the excessive lighting equipment, Daphne could more intimately capture the essence and beauty of her clients. Walls literally came down. There was just the camera, the client and the photographer.

During this inner awareness period of her life, Daphne came across an interesting article in Cosmopolitan Magazine, which told how a particular playboy playmate of the month captured the eye of a Hollywood producer, who in turn sent for the centerfold model to audition for a part in his latest film. When the centerfold model arrived for the appointment, the producer did not even recognize her, stating that the woman in his office did not bare the slightest resemblance to the perfect fantasy girl he had seen in the magazine.

“In that moment, when I read that article, I said to myself, men are truly duped,” Daphne surmised. It was then that she felt she received her calling. “I wanted to be the equalizer for the average woman who doesn’t have all the beauty enhancement techniques, products, services and artists that help manufacture the unattainable, unrealistic, images that men see in the magazines.”

From that moment on, the studio evolved into a place where women receive what they need to safely express their sensuality and convey it via a photograph.

Daphne has a lifelong interest in Spirituality, Energy Healing, Card Reading, Reiki, Astrology and Numerology and continues to learn and utilize these teachings in her photography sessions. She has practiced Buddhism since 1976. By simplifying her understanding of METAPHYSICS , Daphne and her partner Diane created “TELL A FORTUNE”™, a patented system of card reading for the novice. It sold out on the Home Shopping Club and is available at www.tellafortune.com/fortune.html They also created a “Do-It-Yourself” Feng-Shui Kit™also available at: www.tellafortune.com/feng.html

Back to top of page